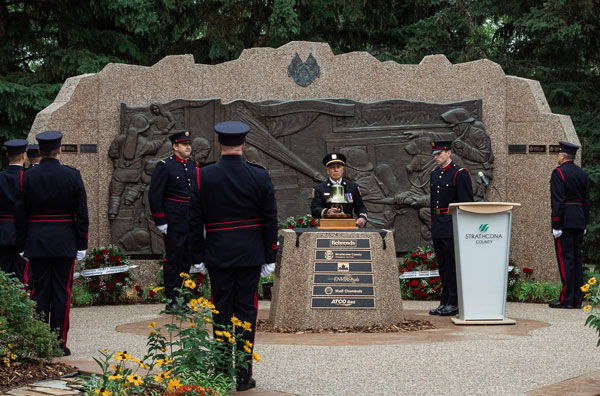 Originally dedicated on October 18, 2002, the Memorial stands to represent all emergency response personnel lost as they selflessly responded to the needs of the community.

The site offers a location for first responders, their families and supporters to gather and honour the fallen. There are six members from Strathcona County whose names are honoured on the monument:

The flags at the site are raised and lowered to honour the passing of fire, police and EMS personnel from across North America who perish in the line of duty.

“The Memorial is a dedicated, permanent space that invites us to pause and remember the brave people that have made the ultimate sacrifice for those they serve,” says Mayor Rod Frank.

“This Memorial offers a location for us to gather and honour our fallen, build brother and sisterhood connections and support each other in ways only emergency services families can provide,” says Strathcona County Emergency Services’ Officer of the Guard and Firefighter/Paramedic Matt Nixon.

This year, the ceremony will take place on September 10 at 10 a.m. at the Strathcona Fallen Firefighters’ Memorial, 1933 Sherwood Drive. Emergency responders will march on Sherwood Drive from Salisbury Composite High School to the Memorial site.

The Strathcona Fallen Firefighters' Memorial was created in partnership with the Strathcona Honour Guard, IAFF Local 2461, Strathcona County, and many industry partners.

The memorial wall is a 6’x15’ bronze memorial plaque designed by the artist Zazo. It depicts events from an actual incident in the Mills Haven neighbourhood where Strathcona County’s integrated services were critical in a safe rescue and response. Residents were safely rescued from the fire by a firefighter on a ladder and handed over to awaiting fire fighter/paramedics where the residents were assessed and treated; all while a fire attack was being performed to extinguish the fire.

The phrase "...and then there was silence..." is mounted above the monument which is significant for emergency services. Traditionally, the end of an incident or shift would be signified by the ringing of a bell three times. This meant that all members were accounted for and headed home. The bell would be followed by silence as the firehouse was empty, or the incident had been returned to normal. Now, the ringing of the bell is known as the "Last Alarm" and used as part of the annual ceremony. The Last Alarm is the ringing of a bell three times to signify a lost member’s final calling home. It is followed by a moment of silence for the member, their spouse and children.