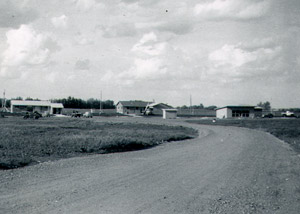 Wet weather meant you needed your rubber boots. The winter of 1955-56 marked the arrival of the first residents Sherwood Park.

The early months of 1956 were wet and the unpaved streets of Sherwood Park were a sea of mud that first spring and summer. Venice Harris, who moved in with her family in March 1956, said, "It was terrible! Because we had no sidewalks and no streets, we would leave our cars parked up on the gravel road and we'd put on our boots and walk home. We'd go up there and leave our boots at the side of the road and get in the vehicle." The boots were still there when they returned from Edmonton - they were too muddy to walk off on their own!

Kay Saunders, whose family also arrived in March 1956, remembers the necessity of keeping your rubber boots handy in order to visit the neighbours.

The muddy conditions created many memories for the first residents of Sherwood Park. "The First 25 Years", a book on the history of Sherwood Park includes many of these stories:

David and Myrne Martin tied their new rug to the roof of their 1949 Ford after the store refused to deliver it because of the mud. They were grateful to the neighbours who laid lumber between their homes for those walking from where they parked their cars.

Bob Blair had a Massey Harris tractor, which came in handy pulling out the trucks and cars that got stuck on the street. When they moved into their home in March 1956, they arranged for the moving van to arrive very early in the morning so that the ground would still be frozen.

Originally, the main access route from Edmonton was 76th Avenue (old Highway 14), and the section of 76th Avenue between Edmonton and Sherwood Park could be hazardous. Mrs. Harris recalls that the road from Edmonton was gravel and in the wintertime, "You'd follow two ruts of ice all the way in and hope you didn't meet anyone coming the other way!" When the Sherwood Park Freeway and the interchange at Highway 14 were opened in 1968, safety improved and Sherwood Park became even more attractive to future residents. Henry Unrau, who moved to Sherwood Park in July 1956 points out that the roads improved, but the traffic increased too. "It used to take about 20 minutes to drive into town and now, 50 years later, it still takes 20 minutes!"

From 1965 to 1968, Diamond Bus Lines provided service between Sherwood Park and Edmonton. They were replaced by Western Bus Lines, then Grey Goose Bus Lines and then Briggs Brothers, who operated until 1977, when the County entered into a contract with Edmonton Transit. Strathcona County Transit came to be in 1989 and today, operates 66 busses serving 1.89 million riders.