NEW! Youth 12-17 may need to show proof of vaccination beginning December 15. All Albertans 5+ can now get vaccinated. Proof of completed vaccination series with personal QR code is the only accepted vaccination proof for all non-essential services. Negative test or medical exemptions are accepted. Private outdoor gatherings are limited to 20 people and 2m distancing. Masks and physical distancing are mandatory province-wide in all indoor public spaces, workplaces and public vehicles. View the current Strathcona County COVID-19 case count. Isolation is mandatory if you have COVID-19 or core COVID-19 symptoms. 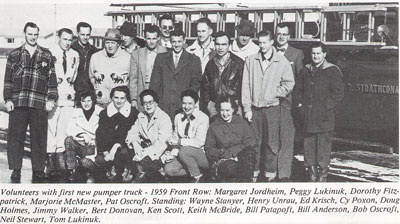 In 1958, the Municipal District of Strathcona started construction of a fire hall, which was opened in February 1959.

The building, on the corner of Alder and Ash, now houses the Strathcona County Museum and Archives.

A new pumper truck also arrived, along with protective clothing, breathing apparatus, a resuscitator, and other firefighting equipment. This was welcome equipment for the volunteers who had formed the brigade in November 1956.

In July 1959, automatic telephone service came to Sherwood Park and five firefighters had fire alarm phones installed in their homes, which rang simultaneously when a call was placed to the emergency number.

From their homes, these firefighters could activate the siren on the roof of the fire hall to call the other volunteers. The siren also rang daily at 7:30 p.m. to check the siren and was an unofficial "curfew" for many of the neighbourhood children, who would head for home when they heard it.

In 1962, a second pumper truck was purchased and the fire department began to respond to rural fire calls.

Henry Unrau, one of the original volunteer firefighters, remembers his time with the fire department as a highlight.

"It was so far removed from my teaching vocation and if you've never ridden in a fire engine with the siren screaming and the lights flashing, you really haven't lived! It was exciting and you never knew quite what you were going to find when you got there. We really relied on each other. We formed a very close-knit family because each of us knew that our safety depended on the back up behind us."

Today, Strathcona County Emergency Services answers over 4,000 calls a year throughout the county and operates out of five fire stations located in Sherwood Park, Ardrossan, South Cooking Lake and Josephburg. Personnel are trained in fire, rescue and emergency medical response, resulting in an integrated service to residents.