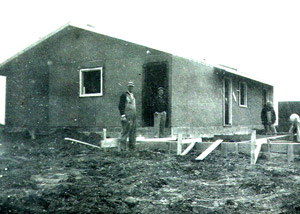 In the early 1950's, developers John Hook Campbell and John Mitchell envisioned a satellite town of 100 houses to accommodate employees of the industries east of Edmonton. In 1953, they received approval from Municipal District of Strathcona for the development of the residential hamlet named "Campbelltown" and in September 1955, the first model homes were opened to the public (#951,939,927 and 915 Birch Avenue).

The Sherwood Heights neighbourhood boasted "all-weather paved roads, fifty percent lower taxes and safety-planned streets." The sixty-eight home designs were priced from $10,459 to $14,100. Homes were available for a "small down payment" with thirty-year terms available. Show homes like "The Merrymen" had four bedrooms and a bath with payments of $59.08 per month. Conversion to 2006 dollars shows prices would range from $77,000 to $103,800 and the monthly payments on "The Merrymen" would be $435. Still a great bargain compared to the new home prices of 2006, when a 1300 square foot two-storey sells for about $250,000!

Early residents recall the challenge of saving for their downpayment. Compared to the minimum five percent downpayment required today, Oleh Cherkawsky recalls saving $3000 which was twenty-five percent of the total cost of their house.

Brochures appealed to the Lady of the House by stating that "Sherwood Park Ranch Homes [were] designed and built to make your housekeeping easier - to make life more enjoyable - to give you more time for yourself. You'll have wonderful kitchen conveniences including an eye-level wall oven, matching countertop range, garbage disposal and exhaust fan." For the Man of the House, "No effort has 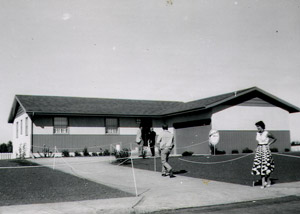 been spared to bring you the best quality home ever made available in Canada-a permanent investment in better living for your family."

Gordon Walker and his family became the first Campbelltown residents in December 1955, when they rented one of the model homes on Birch Avenue. In January 1956, the Otto and Dawdy families joined them, moving into two of the other model homes.

The first family to move into its own home was Ralph and Eileen Johnson and their children, who moved in February 11, 1956. Other families followed soon after. A voter's list from about 1957 shows 217 voters in 109 homes on Cottonwood, Conifer, Birch, Alder and Fir. This doesn't, of course, include the hundreds of children that lived here too!

Later in 1956, the name of the hamlet was changed to Sherwood Park - Canada Post would not approve Campbelltown, since there were several Canadian communities with similar names. Venice Harris even recalls being sent a cheque from Edmonton that arrived via Campbelltown, England!