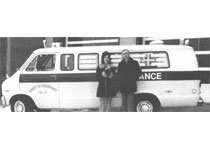 In early 1972, local resident Jean Bilan organized 150 volunteers to canvas Sherwood Park to collect signatures in support of local ambulance service. Prior to this, if an ambulance was required, it had to travel from Edmonton which was considered too far away for effective service.

A total of 6,000 signatures were collected and presented to County Council in April 1972. Ambulance service was established in Strathcona County with the creation of Bylaw 200.

Information and photos courtesy of the Strathcona County Museum and Archives.