The Strathcona County masking bylaw has lapsed; however, masks are still mandatory on public transit and in high-risk settings for everyone 13+ under the provincial mandate. Most COVID-19 restrictions have been lifted by the Province. All Albertans 5+ can get vaccinated.

Smart Fare will allow customers to pay for transit using a variety of methods. Strathcona County Transit (SCT) and municipal transit systems in the region are acquiring technology that would allow for fare payment using credit cards, debit cards, and other compatible smart cards and smart devices with the system. The "tap and go" fare payment system will make paying for transit simple and it will also make travel across the region easier for customers, since one account could be used on all participating transit systems, including Strathcona County Transit, Edmonton Transit and St. Albert Transit.

Transit customers could set up an “account”, which would allow them to load value and other transit fare products. Then, customers would simply tap their fare card, credit card, or device at the reader as they board. Customers will still have the option to use cash in the fare box.

Arc - The smart way to pay for and ride transit

Arc is the name of the Edmonton region's smart fare product. It symbolizes creating a path between two points - much like how transit connects us to vital services, supports and each other.

It is an account-based electronic fare payment system that will make paying for transit easier and more convenient in the greater Edmonton region. Transit users in Edmonton, St. Albert, Strathcona County, Fort Saskatchewan, Leduc, Spruce Grove and Beaumont will all benefit from the same transit payment system when the program launches.

The system includes an Arc card that can be tapped when entering and exiting buses and LRT on all seven participating transit systems. With Arc, money is stored on a secure online account, not on the card.

Specific program details on how Arc will work for different fare groups and individual customers will be available on a new website - myArc.ca. Also, there will be a new Arc call centre to answer individual questions. Only high level program information is available through Edmonton's 311 and the regional transit customer service agents. 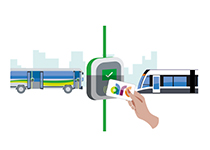 The first group of riders to use Arc launched in fall 2021 as students at post-secondary institutions participating in U-Pass became the first eligible group to use the new system.

We are ensuring that Arc is rolled out thoughtfully, and our phased approach is how we will get it right. It starts with a pilot testing using a selection of customers from the following groups:

Starting January 1, 2022, pilot testing will begin in Edmonton, St. Albert and Strathcona County. A  select group of participants will pay for their transit rides by using an Arc card rather than using a regular monthly pass or paper tickets. They will put money into an online Arc account that is linked to the Arc card, and then they will tap on and tap off buses and LRT stations as they ride anywhere in all 7 participating regions.

We are testing the entire system to ensure it is operating correctly (e.g., taps are being captured, fares are being calculated correctly, and Arc accounts are functioning properly). The test results will determine when the system is made available to a wider range of customers.

Exact timing of launch will depend on the results of the pilot testing.

Phase 1 of the Arc system will include:

Participants will pay for their transit rides by using an Arc card to tap on/off the bus or LRT, rather than using a regular monthly pass or paper tickets. They will put money into an online Arc account that is linked to the Arc card, and then they tap on/tap off buses/LRT stations as they ride anywhere in all seven participating regions.

Exact timing will depend on the results of the Phase 1 roll out.

Phase 2 of the Arc system will be expanded to include:

Exact timing depends on the results of the Phase 2 roll out.

Phase 3 of the Arc system will be expanded to include:

The advantage of using an Arc card is that, as long as customers tap off within the 90-minute travel window, the fare will count toward a daily or monthly cap. For example, in Phase 1, the monthly Strathcona County commuter cap is $108.50 or a $100 monthly cap for an ETS regular adult fare user.

After a customer reaches their monthly cap, they will ride for free for the remainder of the day or month. This encourages customers to purchase and use an Arc card, and rewards frequent transit riders. 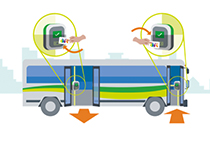 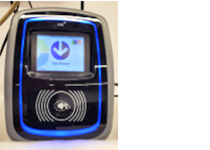 The Arc card readers are now installed on most participating transit agency buses and are turned on as part of the pilot test with select groups of customers. More customers will be able to tap on/tap off during Phase 1 of the system rollout. 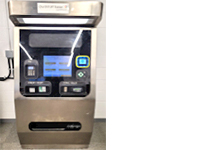 Arc card vending machines are being installed at all LRT stations in Edmonton, and key regional transit transfer locations (including Edmonton’s Kingsway Transit Centre, the Naki Transit Centre in St. Albert, the Bethel Transit Terminal in Strathcona County, and at the Edmonton International Airport). These machines will be turned on for pilot testing and sell Arc cards/Arc tickets when phase 1 proceeds. Regular transit fare vending machines that sell paper passes/tickets will remain in operation alongside the Arc machines.

Why did you choose the Arc name?

SCT and regional partners are acquiring a Smart Fare, rather than a Smart Card, system. Smart Fare technology is very similar to the way you use a bank card with your bank. It uses an account-based set-up, meaning the account information stays on-line. If a customer were to lose their Smart Fare card, they could replace it without losing their account credit or fare purchase. Loading the Smart Fare account is instant. Once a customer adds value, they can use it right away.

Smart Card technology is slightly older and has the value linked to the specific card – much like a coffee or gift card. If someone was to lose a Smart Card, they would lose the value on that card as well.

April 2013 – Council formally endorsed a joint application between the City of Edmonton, The City of St. Albert and Strathcona County to the provincial GreenTRIP program to help fund a Smart Fare system.

2015 - The Government of Alberta approved GreenTRIP funding for this regional initiative, which will improve convenience for customers using transit service in the Capital Region. Strathcona County, Edmonton and St. Albert are also supplying some of the funds for this project.

Spring of 2016 - LTK Engineering Services was retained as the overall program manager for this project. LTK is experienced in Smart Fare implementation and has strong knowledge of the industry.

April 2017 – an In Camera Smart Fare update was provided to Council on the negotiations with the preferred vendor.

July 6, 2017 - The City of Edmonton announced the signing of a $31.4M contract with Vix Technologies. This clears the way to begin to design and build the Smart Fare technology over a three year period. Once the technology is in place, Vix will also be responsible to operate and maintain the modern electronic transit fare payment system for the region for 12 years. The system will serve multimodal transit systems in Edmonton, Strathcona County, and the City of St. Albert. The system design also allows it to be expanded to additional regional transit systems in the future.

Fall 2020 - Smart fare validators have been installed on Strathcona County buses, St. Albert buses, and some Edmonton buses. Installations on ETS buses were paused in spring 2020 due to the impacts of COVID-19, but will resume once resources are available and safety protocols allow.

Once all installations are complete and the system is ready, the project will move into the pilot phase. Pilot participants will test their Smart Fare cards by tapping their cards on the validators when boarding or exiting the buses they normally ride on. The pilot will not be isolated to particular routes and will take place on buses from the different partner transit agencies, including Strathcona County Transit.