NEW! All Albertans 5+ can now get vaccinated. As of November 15, proof of completed vaccination series with personal QR code is the only accepted vaccination proof for all non-essential services. Negative test or medical exemptions are accepted. Private outdoor gatherings are limited to 20 people and 2m distancing. Masks and physical distancing are mandatory province-wide in all indoor public spaces, workplaces and public vehicles. View the current Strathcona County COVID-19 case count. Isolation is mandatory if you have COVID-19 or core COVID-19 symptoms. 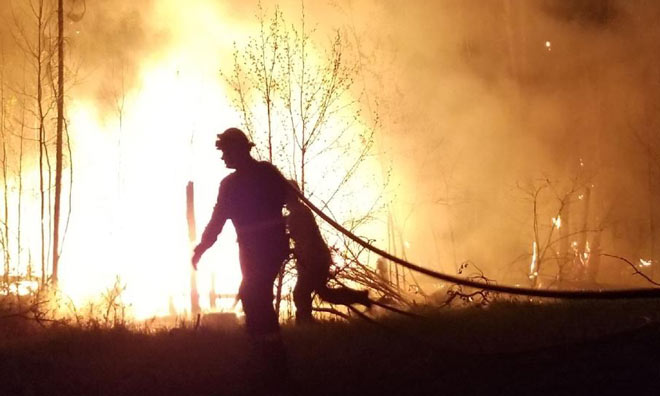 The situation remains stable and the fire is now considered under control.  Crews remain on-scene to extinguish flare-ups caused by the wind. A helicopter continues to be used for reconnaissance and water bucket drop. Resources currently on-scene include 14 firefighters, one command staff, four brush trucks, two dozers and four water tenders. Township Road 562 between Range Roads 211 and 213 remains closed.

Fortis Alberta is working to replace damaged infrastructure in the area, and is expected to finish work over the weekend.

No definitive cause for the fire has been determined, although fire investigators have confirmed there was no natural cause.

Since Saturday, May 12, over 600 hectares have burned; no buildings have been lost. Residents living at three farms who were voluntarily evacuated have returned home. There is currently no immediate threat of fire to any industry-related assets or infrastructure in the area.

A fire ban is in effect for Strathcona County, along with several other municipalities in the Capital region. No outdoor fires are permitted until further notice, including burning barrels, fireworks, recreational fire pits and charcoal barbecues. The use of gas and propane appliances, such as barbecues, is permitted. Fire and fireworks permits are suspended.

Failure to comply with the fire ban, burn permit conditions and the fire bylaw may result in a $1,000 fine as well as significant charges for the cost of responses.
​​​​​​​More information about fire bans

Set in the centre of Alberta’s energy and agricultural heartland, Strathcona County is a thriving, successful and vibrant community of over 98,000 residents. Strathcona County is made up of the urban area of Sherwood Park and a large adjacent rural area of farms, acreages and smaller hamlets. It is home to 75 per cent of refining in Western Canada. With a focus on economic, governance, social, cultural and environmental sustainability, Strathcona County is committed to balancing the unique needs of its diverse community.